How it Works
About us
Resource Toolbox
Search
Login Sign Up 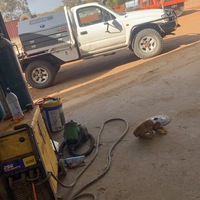 My name is Ben Murray I am 19. I’m from Kangaroo Island,South Australia. I have grown up farming, our family farm runs sheep & cattle( commercial as well as Breeding Simmental Bulls. I started working in the seed potato industry on kangaroo island 3 years ago and have since moved into the broad acre cropping industry and I love it. I’m keen to learn. I have my car license. I have experience operating mostly John Deere and CASE IH ranging from 100hp-550hp tractors, Trimble & Green Star GPS, airseeders, delvers, graderboards, mower conditioners,SP windrowers, hay rakes, spreaders and chaser bins. 8 I can drive a semi & forklift ( but am unlicensed). I have previous experience in row crop and controlled traffic operations, and have worked in many different locations to gain experience for the last 12 months, working from Jerilderie, NSW, Middlemount, Qld and many other locations. I have grown up around machinery in the family fert spreading business. I have a good mechanical knowledge and come with my own tools if required,I have my ChemCert, I have my first aid cert and I have also completed my Cert II in Agriculture and am currently doing my Cert III in Agriculture. I am more than happy to work long hours and night shifts. I’m a hard worker and more than happy to complete any further training/ licensing etc to make me more useful to your operation. References: Scott Goodsell: 0428 699 255 (Goodsell Group- controlled traffic Operation) Brad May: 0429 435 720 (BJM Hay Contracting, Kangaroo Island, SA) Thank you for your time, Ben Murray.

Country of Origin: Australia
DOB: September, 1999
Visa:
Has own transport:
Has own Accommodation:
Grew up on farm:


He was with me from the start of October for about three months. Operating machines, couldn’t fault him to be honest. He was a great operator, did all daily maintenance, fixed breakdowns on the spot, really reliable. He was mowing hay mostly. I have no hesitations at all, like I said, I couldn’t fault him.